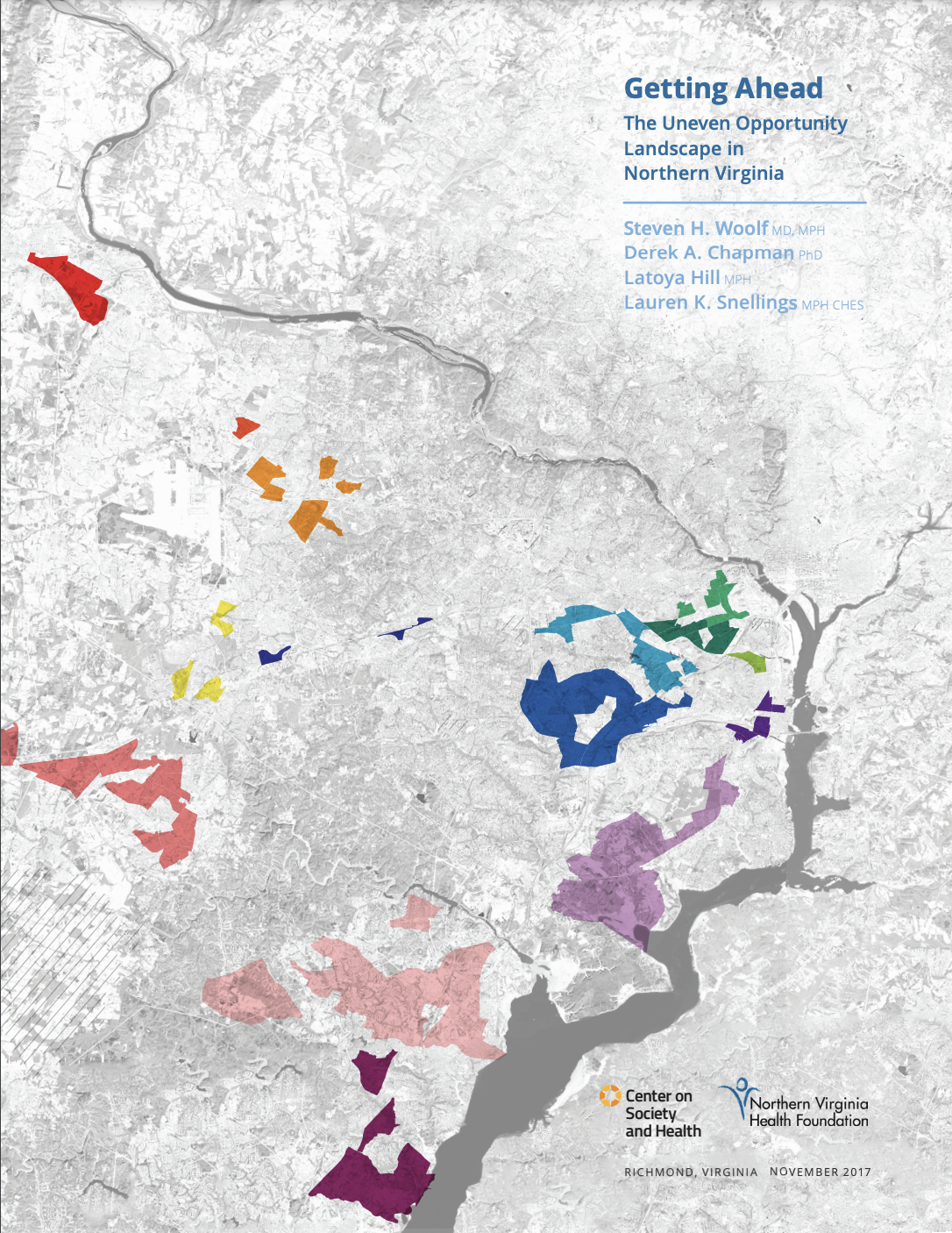 SPRINGFIELD, VA (November 28, 2017) – When it comes to providing opportunities for social and economic mobility, Northern Virginia is a region of stark contrasts, with communities of great affluence virtually adjacent to highly disadvantaged neighborhoods where residents struggle to get ahead. A new report by the Center on Society and Health at Virginia Commonwealth University (VCU), commissioned by the Northern Virginia Health Foundation (NVHF), found 15 “islands of disadvantage” where people face multiple, serious challenges, interspersed among the region’s wealthy communities.

The report is the first of its kind in Northern Virginia to delve deeply—at the census tract level—into a wide range of social and economic factors that shape residents’ health and their opportunities to thrive. State vital statistics show that the estimated life expectancy of newborns in Northern Virginia can vary by as much as 18 years, depending on the census tract in which a child is born. Although the quality of life in Northern Virginia is generally good, the report shows that the opportunity landscape to “get ahead” varies dramatically across the region and even more distinctly across small geographic areas.

NVHF released the report today with a web-based interactive mapping tool that allows users to view an array of data at the census tract level. The report covers Alexandria, Arlington County, Fairfax County, Loudoun County, and Prince William County—as well as cities within the region.

“Not all Northern Virginia is populated by affluent, well-educated families with the resources for leading a prosperous life,” said NVHF President Patricia N. Mathews. “This report shows that we need to think more strategically and more holistically about how to create opportunity for everyone in Northern Virginia, especially those who are most vulnerable.”

In dozens of census tracts across the region, opportunity is limited by problems such as poverty, low levels of education, lack of affordable housing, and inadequate access to health care. People of color are disproportionately located in disadvantaged areas, and, as a result, face greater challenges.

A Study in Contrasts

One Fairfax County tract, in the Culmore area of Bailey’s Crossroads, is only blocks away from the affluent Lake Barcroft neighborhood—yet this largely Hispanic tract is among the region’s most disadvantaged communities. No other census tract in the region ranked poorly on so many measures of disadvantage. One-third of children lived in poverty. Only 14% of adults had completed college. Few people owned homes, the median rent was $1,374 per month, and 30% of renters spent more than half their incomes on rent. More than half of residents lacked health insurance. Only 28% had a vehicle and 35% relied on public transit to commute to work.

This is not an isolated circumstance. For example, high-income neighborhoods in Alexandria’s historic Old Town—where the average home value in one census tract was $935,000—were blocks away from low-income tracts to the immediate north and south. The poverty rate in one nearby census tract was 23%, and 58% of the children lived in poverty.

“The data show, in very stark terms, that, even when surrounded by affluence, many of our neighbors are struggling,” said Dr. Steven Woolf, the report’s lead author and director of VCU’s Center on Society and Health.

Across the region, median annual household income was approximately $122,000, but in 12 census tracts it was below $50,000. In 44 census tracts, 99% of children ages 3 to 4 attended preschool, but in 15 tracts, fewer than 0.1% of preschool-age children were enrolled. Similar disparities were found in education, employment, housing, and health care.

A Call for Cross-Sector Solutions

Dr. Woolf noted that the social and economic factors studied in this report have significant impacts on residents’ health. Research shows that health care accounts for only 10% to 20% of health outcomes; the rest is largely determined by factors such as a person’s income, level of education attainment, and living conditions.

“Health is not simply a matter of clinical outcomes,” Ms. Mathews said. “Health is about how we live, and the various economic and social factors that affect everyday life. This means that solutions for addressing inequities must focus not only on health care but on a broad range of issues, including education, workforce training, housing, and transportation.

“The win-win,” she added, “is that the solutions that are most important for improving health and wellbeing are in fact those that can also grow business and local economies. That’s why it will take all of us, working together, to make Northern Virginia a place where everyone can thrive.”

NVHF hopes that state and community leaders will use the new report and mapping tool to work together on expanding opportunities for health and prosperity across the region.

To review the new report and mapping tool, visit https://novahealthfdn.org/getting-ahead-report/.