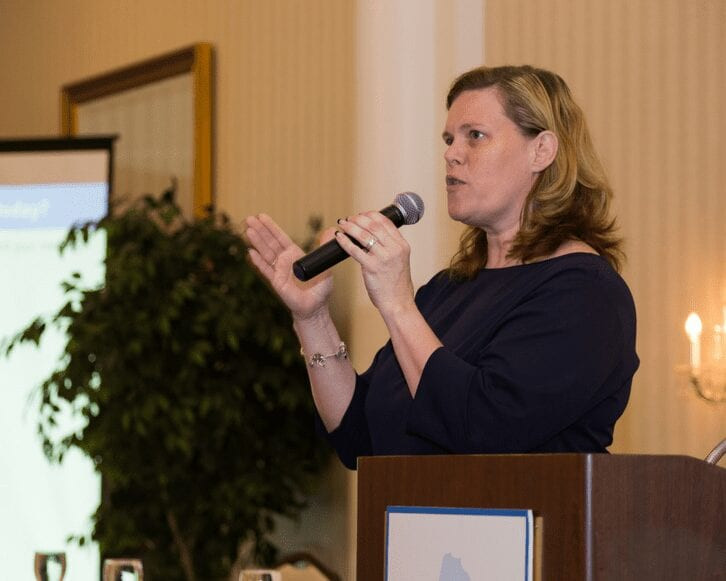 Sampson-Jackson, founder and CEO of Integration Solutions, kicked off a lunch-and-learn session the Northern Virginia Health Foundation (NVHF) held May 22 on understanding and dealing with trauma to build community resilience. Following her presentation, a panel of providers and specialists who work to reverse the effects of trauma in Northern Virginia offered their insights and observations. Together, they fielded questions from an engaged audience of more than 80 attendees.

Trauma affects some 220 million people in the United States and is linked to more than 70 physical and mental health issues.  It often begins in childhood, and includes:

When these kinds of things happen to you before you turn 18, they’re called Adverse Childhood Events—ACES, for short. And the more ACES you experience, the higher your risk becomes for all kinds of bad outcomes, from addiction to unintended pregnancy to attempted suicide to liver and heart disease.

“Trauma is not what’s wrong with you,” Sampson-Jackson said. “It’s what’s happened to you.  It’s an experience.”  Trauma is pervasive in the United States. Consider:

Untreated exposure to traumatic events can rewire our brains, alter our physiological response to stress, and have damaging long-term consequences for our health.  With an ACES score of 4 or higher (meaning that you’ve experienced four or more ACES by age 18), you are:

Sampson-Jackson experienced eight ACES and as many as 10 residential placements by the time she was 19. She was the angry kid who threw furniture across the room, smashed windows, and broke down doors.  No one knew what to do with her.

Fortunately for her, a mental health technician named Howard saw her as more than just a messed-up kid. He saw her humanity and her potential, and he offered her compassion and support.

That single connection made the difference in Sampson-Jackson’s life.  That’s how she started to build resilience.

Kelly Henderson, PhD, executive director of Formed Families Forward, an organization that serves foster, adoptive, and kinship families with special needs children, noted that the education system has an important role to play in addressing trauma because kids spend so much time at school.  They’re also pressed to meet multiple demands at school—for example, academic achievement, self-regulation, and social interaction.

But many kids who’ve experienced trauma don’t know how to meet these demands; they need to be taught.  “Transitions are huge challenges,” Henderson noted as an example, “but we can reduce anxiety through preparation.

A Need for Both Awareness and Training

Chrissy Cunningham, MSW, prevention coordination specialist for the Fairfax County Department of Neighborhood and Community Services, emphasized the importance of workforce training in trauma-informed care. “As we ask teachers and others on the frontlines to take on this new lens, we need to recognize that many of these first responders have their own histories of trauma,” she said.  “There has to be something for the workforce.”  Although trauma awareness training is common across Virginia social services networks, it is not always coordinated.

Ramfis Marquez, PhD, LPC, said that all staff at the Greater Prince William Community Health Center, where he is the director of behavioral health services, have received training in trauma-informed care.  “Everybody should be able to understand what is happening to the human being they’re interacting with,” he said.  “You have to focus on that person in the moment and work with them.”

The goal, he said, is to “normalize resilience” so that people who have experienced trauma learn how to feel safe outside the clinical setting—in their homes and in their communities, and in all types of social situations.

The message I took from all four speakers is that, while addressing trauma in our communities is essential, it will take time and work.  It will require a shift in our personal behaviors and awareness, a shift in culture, and a shift in systems.  And it will require all of us to work together.

As Cunningham observed: “We’re all community members.  Your student is my patient is someone else’s neighbor.  We all need to have shared ownership and shared responsibility.”